A representation of the virtual cryptocurrency bitcoin is seen in this picture illustration taken October 19, 2021. REUTERS/Edgar Su/File Photo

While profit-taking after the massive run-up in prices was emerging as the biggest factor, analysts pointed to other reasons behind the more cautious sentiment, such as bitcoin's blockchain upgrade last weekend, higher U.S. inflation and China's latest directive to its state-owned firms not to engage in cryptocurrency mining.

Bitcoin has doubled in value since January. Its correction could get severe if it fell through $58,000, Craig Erlam, senior market analyst at online broker Oanda, said in a note.

"This is roughly where it found strong support at the end of October and given how much it's struggled to make major strides higher since, it could be the catalyst for a deeper correction," Erlam wrote.

News that Twitter would not be investing in cryptocurrencies and the U.S. Securities and Exchange Commission's (SEC) rejection of what would have been the first U.S. spot bitcoin exchange-traded fund by VanEck were also dampeners.

"This has the feel that we could see some messy two-way action, and it wouldn’t surprise to see 68,000 capping the upside, 57,000 the downside." Chris Weston, head of research at brokerage Pepperstone in Melbourne, wrote in a client note.

In another sign of the world's growing fascination with blockchain and cryptocurrencies, the Staples Center sports and entertainment arena in downtown Los Angeles said it will berenamed the Crypto.com Arena under a naming rights agreement with Singapore-based Crypto.com platform. read more 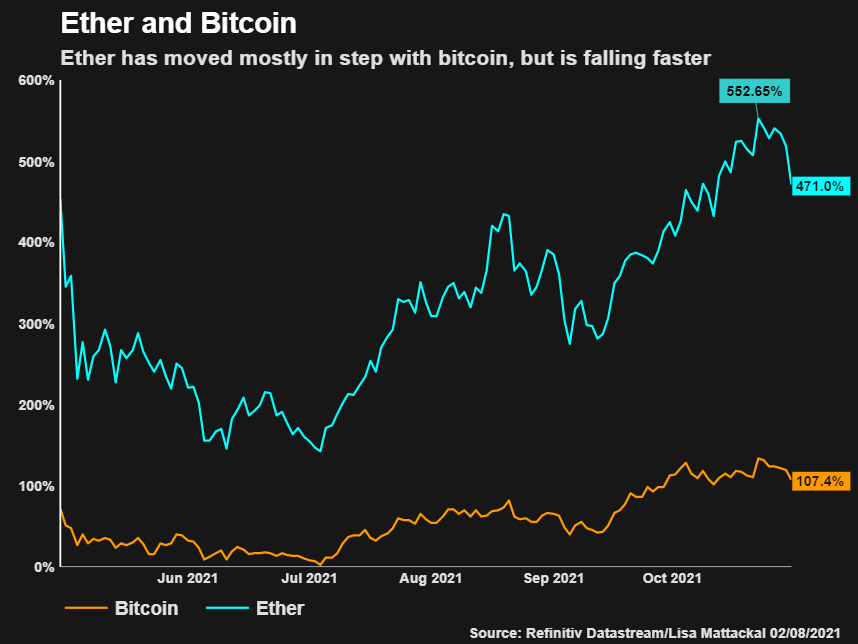 In the past week, traders have become less willing to pay to hold long positions in bitcoin futures. Average funding rates fell to 0.00354% on Tuesday, according to cryptocurrency analytics platform CryptoQuant, their lowest since late September and down from 0.04122% on Nov. 10.

"With the funding rates now declining to neutral levels, it seems to be a healthy balance between long and short demand in the market," crypto analysts at Arcane research said in a research note.

Money pouring into bitcoin products and funds has hit a record $9 billion this year, and totalled $151 million last week in the 13th consecutive week of inflows, data from digital asset manager CoinShares showed on Monday.

Although flows have been positive recently, volumes have been subdued in the second half, averaging $750 million daily versus $960 million in the first, CoinShares said.

Singapore-based digital economy trading firm QCP Capital pointed to the relatively heavier selloff in ether (ETH) and said that might continue, alongside a pick-up in options activity on that token.

"We’ve turned quite neutral after this awaited leverage wash-out. We expect BTC (bitcoin) to be stuck around 60,000 given the strike gravity. And perhaps more volatility in ETH and altcoins," they wrote in a post on social media platform Telegram.