Cryptocurrencies in a time of war - Reuters.com

A representation of the virtual cryptocurrency Bitcoin is seen in this picture illustration taken October 19, 2021. REUTERS/Edgar Su/

LONDON, March 4 (Reuters) - Cryptocurrencies have been close to the headlines since Russia invaded Ukraine, with the ever-volatile bitcoin in demand in Russia and beyond.

Here are some charts that look at how cryptocurrencies have fared during the largest attack on a European country since World War Two.

Correlated or not? That's long been the question for bitcoin , with the original cryptocurrency at times marching to the equity beat -- and at other times not.

Bitcoin initially slumped after Russia launched its assault on Ukraine as investors dumped riskier assets, falling as much as 8% on Thursday before clawing back losses on the day. European stocks (.STOXX) fell 3.3% while the SP 500 (.SPX) added 1.5%.

The paths of bitcoin and stocks have since entwined again, albeit to differing degrees.

"It's still largely been correlated with U.S. equities throughout this crisis," Joseph Edwards, head of financial strategy at crypto firm Solrise Group, said of bitcoin. 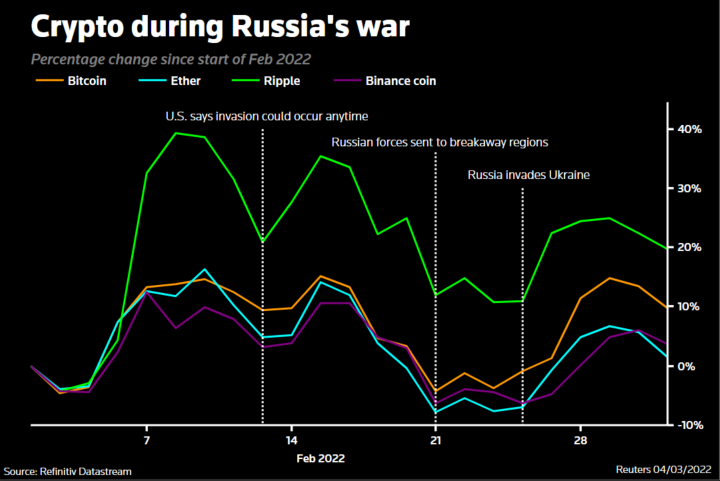 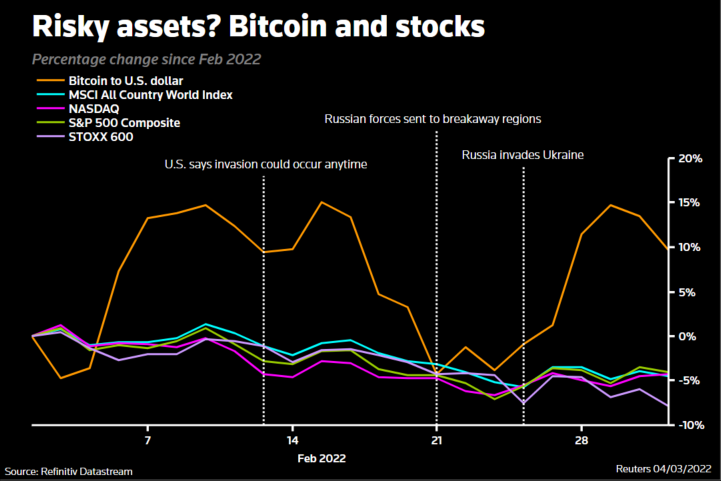 Crypto aficionados see bitcoin as "digital gold," a handy place to store cash during war or disaster. Bitcoin, the argument goes, has a limited supply and runs on a global computer network beyond the reach of governments and is therefore safer than traditional currencies.

Things are never that simple. Bitcoin's safe-haven chops are unclear: It often behaves more like risk-on assets such as stocks.

Investors say that during the war bitcoin's characteristics have stoked demand and helped it outperform other traditional havens. Gold is up 2.6% while the U.S. 10-year Treasury yield has fallen 8.7% since last Wednesday.

Yet the moves may do little to settle arguments over bitcoin's safe-haven credentials, analysts said.

"We don't think BTC is being viewed as a safe haven, nor should be, but instead its appeal is it's a supply capped, credit free, digital bearer asset that is proving to be a viable alternative to traditional finance in this current environment," said Richard Usher at crypto firm BCB Group.

"If the situation continues to escalate and risk markets badly suffer it will struggle to rally further, but in our view still outperform." 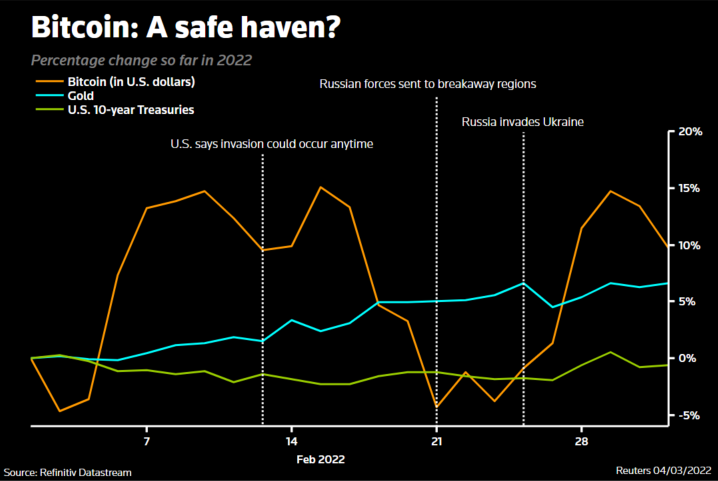 Crypto trading in Russia has soared as the rouble was battered by Western sanctions which aim to squeeze Russia's economy and sever it from the global financial system.

The Russian currency hit an all-time low of 118.35 per dollar on Thursday. read more

Trading volumes between the rouble and major cryptocurrencies hit 15.3 billion roubles ($140.7 million) on Monday, a three-fold jump from a week earlier, according to researcher CryptoCompare.

Rouble-denominated trades with Tether -- a so-called stablecoin designed to keep a steady value -- hit 3.3 billion roubles on Monday, their highest this year and almost five times more than a week earlier, the data showed.

The figures suggest that people are scrambling to covert savings to crypto in Russia.

The war has contributed to the narrative that bitcoin "is not just a speculative asset, it is also a seizure-resistant, policy-independent, longer-term store of value," said Noelle Acheson, head of Market Insights at New York-based Genesis. 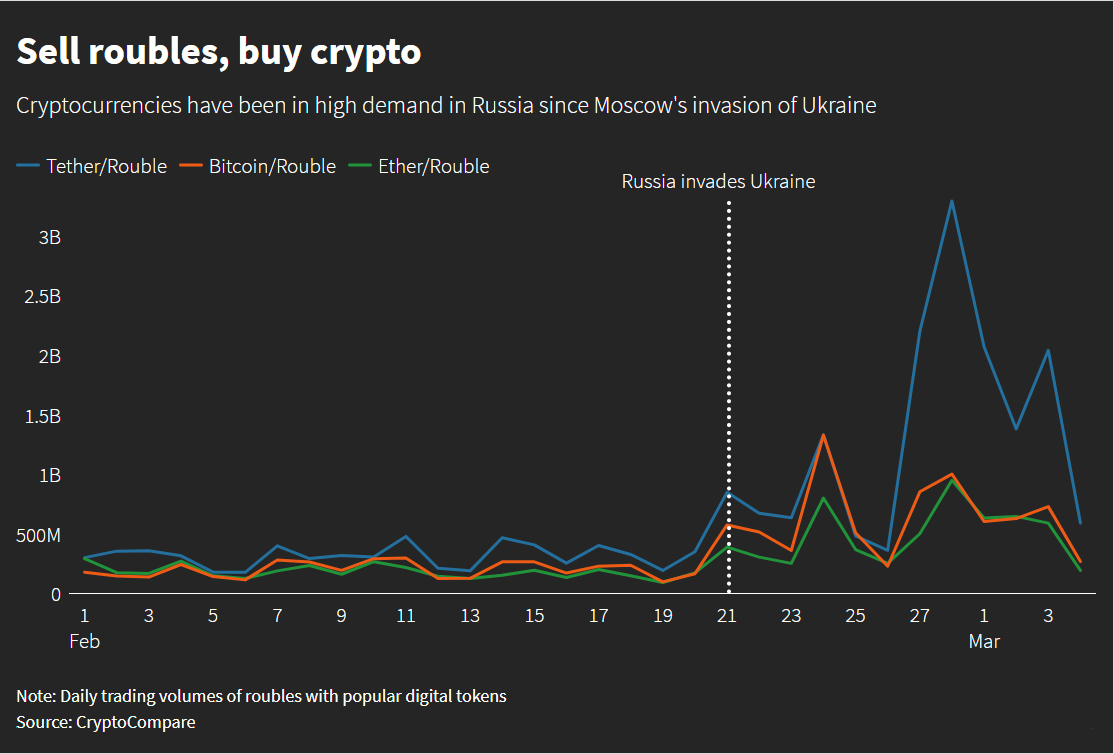