March 29 (Reuters) - As a bleak first quarter draws to a close, crypto seems to have the wind in its sails. It has pushed through the $2 trillion barrier and is proving surprisingly resilient amid global chaos.

Its comparative steadiness, versus previous performance at least, contrasts with stock markets, traditional currencies and even safe-haven gold, which have been shaken by the Russian invasion of Ukraine as well as the Federal Reserve's tightening.

Bitcoin's jumpiness has waned of late.

Its 30-day volatility is around 4%, about two-thirds the level it was in June 2021, according to futures trading platform Coinglass. The highest this year was 4.56% on March 16.

This measures its deviation from its own standard levels, and bitcoin has still had wild swings, such as a 17% jump on March 1. But it's distinctly tamer than in 2021 when it could move as much as 40% in a day.

"What we have seen across other major assets is a huge fallout - from both the U.S. equity markets as well as global markets," he added. "Bitcoin has more or less stayed in a pretty tight range ... but actually, in terms of the relative strength, it's very bullish."

The total value of the cryptocurrency market rose above $2 trillion on Friday, according to analytics platform CoinMarketCap. To put that in context, the market briefly hit $3 trillion on Nov. 10, when bitcoin reached $69,000.

The meandering climb back above $2 trillion has been slow and has also been helped by a mushrooming in coins and tokens - the number CoinMarketCap counts has risen by almost 5,000 since November to stand at 18,511 cryptocurrencies.

Bitcoin's market capitalisation has reached $902 billion, but it still has a ways to go to reclaim the $1 trillion it commanded in November. While still the dominant crypto, its market share has also fallen gradually from as much as 70% of the total capitalisation in early 2021 to 42% now. 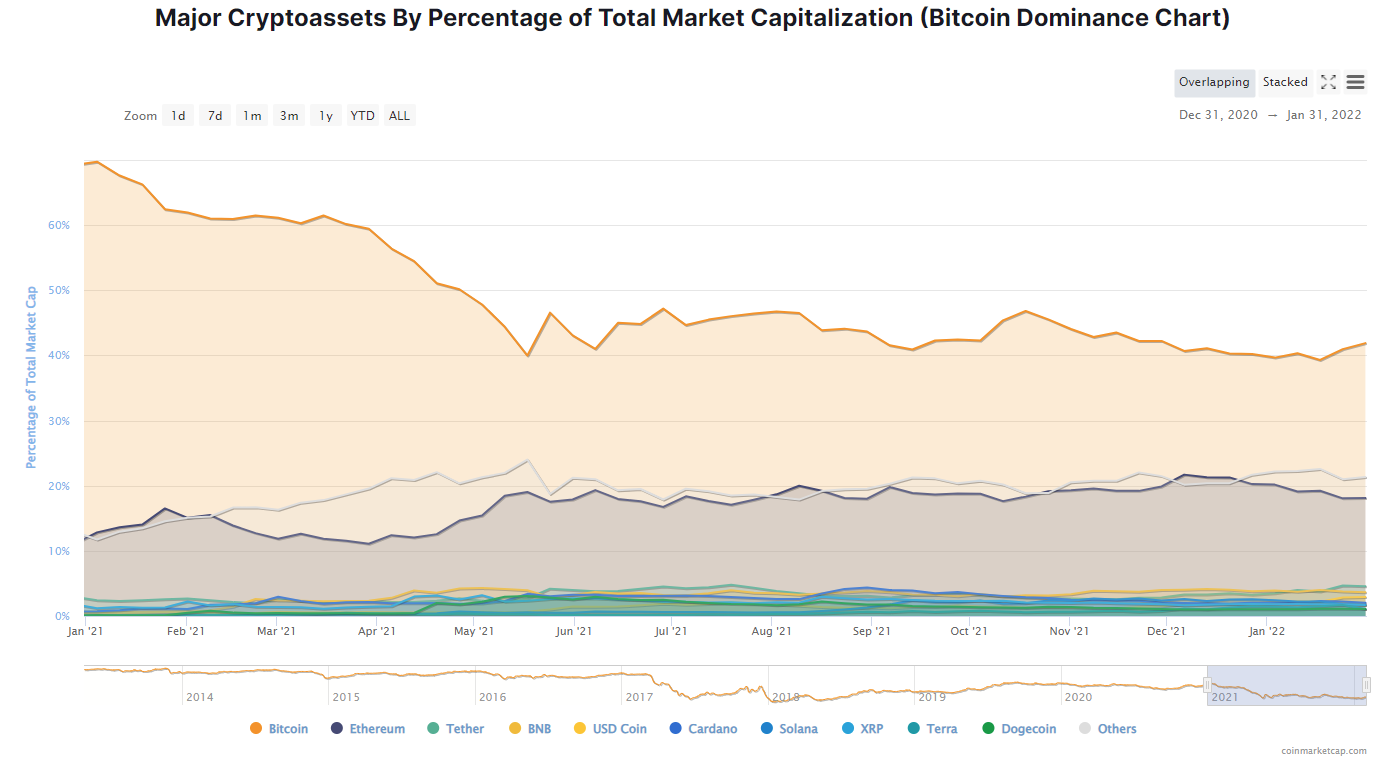 Many a crypto investor has thought they could divine bitcoin's direction before the fickle cryptocurrency left them sprawled in the financial dust.

"Although bitcoin is remaining strong in the short term, rising oil prices increase the likelihood of a recession over the coming year or so," said Marcus Sotiriou, analyst at UK-based digital asset broker GlobalBlock.

"Oil has increased by around 25% in the past six days alone, and bitcoin bulls will want to see this tail off for continued strength."

That said, certain other technical factors are pointing to bitcoin bullishness.

Funding rates, which measure the cost of holding bitcoin via futures, have turned marginally positive after being negative for most of this year, indicating investors are prepared to pay to be long. It stands at 0.003% on analytics platform CryptoQuant, though still below a peak of 0.06% hit in October.

Coinglass's longs-to-shorts ratio has also climbed from 0.95 on March 20 to 1.1, the highest level in at least four weeks.

Blockchain data provider Chainalysis said an increasing proportion of bitcoin – nearly 60% of total supply – was being held for longer than 52 weeks, up from 54.72% in the last 25 weeks.

Yet Ashwath Balakrishnan, vice president of research at Delphi Digital in Bengaluru, cautioned that it was difficult to identify a lasting market direction.

"Everyone's a little cautious," he said. "If (bitcoin) rejects off of $46k and goes back down then it probably means we're stuck with range-bound conditions for at least another month or so."

Opinions expressed are those of the author. They do not reflect the views of Reuters News, which, under the Trust Principles, is committed to integrity, independence, and freedom from bias.