Is Bitcoin technically a religion? A scholar investigates

Read enough about Bitcoin, and you’ll inevitably come across people who refer to the cryptocurrency as a religion.

Bloomberg’s Lorcan Roche Kelly called Bitcoin “the first true religion of the 21st century.” Bitcoin promoter Hass McCook has taken to calling himself “The Friar” and wrote a series of Medium pieces comparing Bitcoin to a religion. There is a Church of Bitcoin, founded in 2017, that explicitly calls legendary Bitcoin creator Satoshi Nakamoto its “prophet.”

In Austin, Texas, there are billboards with slogans like “ Crypto Is Real” that weirdly mirror the ubiquitous billboards about Jesus found on Texas highways. Like many religions, Bitcoin even has dietary restrictions associated with it.

So does Bitcoin’s having prophets, evangelists and dietary laws make it a religion or not?

As a scholar of religion, I think this is the wrong question to ask.

The dirty secret of religious studies is that there is no universal definition of what religion is. Traditions such as Christianity, Islam and Buddhism certainly exist and have similarities, but the idea that these are all examples of religion is relatively new.

The word “religion” as it’s used today – a vague category that includes certain cultural ideas and practices related to God, the afterlife, or morality – arose in Europe around the 16th century. Before this, many Europeans understood that there were only three types of people in the world: Christians, Jews, and heathens.

This model shifted after the Protestant Reformation when a long series of wars began between Catholics and Protestants. These became known as “wars of religion,” and religion became a way of talking about differences between Christians. At the same time, Europeans were encountering other cultures through exploration and colonialism. Some of the traditions they encountered shared certain similarities to Christianity and were also deemed religions.

Non-European languages have historically not had a direct equivalent to the word “religion.” What has counted as religion has changed over the centuries, and there are always political interests at stake in determining whether or not something is a religion.

As religion scholar Russell McCutcheon argues, “The interesting thing to study, then, is not what religion is or is not, but ‘the making of it’ process itself – whether that manufacturing activity takes place in a courtroom or is a claim made by a group about their own behaviors and institutions.”

With this in mind, why would anyone claim that Bitcoin is a religion?

Some commentators seem to be making this claim to steer investors away from Bitcoin. Emerging market fund manager Mark Mobius, in an attempt to tamp down enthusiasm about cryptocurrency, said that “crypto is a religion, not an investment.”

His statement, however, is an example of a false dichotomy fallacy, or the assumption that if something is one thing, it cannot be another. There is no reason that a religion cannot also be an investment, a political system, or nearly anything else.

Mobius’ point, though, is that “religion,” like cryptocurrency, is irrational. This criticism of religion has been around since the Enlightenment, when Voltaire wrote, “Nothing can be more contrary to religion and the clergy than reason and common sense.”

In this case, labeling Bitcoin a “religion” suggests that bitcoin investors are fanatics and not making rational choices.

Bitcoin as good and wholesome

On the other hand, some Bitcoin proponents have leaned into the religion label. McCook’s articles use the language of religion to highlight certain aspects of Bitcoin culture and to normalize them.

For example, “stacking sats” – the practice of regularly buying small fractions of bitcoins – sounds weird. But McCook refers to this practice as a religious ritual, and more specifically as “tithing.” Many churches practice tithing, in which members make regular donations to support their church. So this comparison makes sat stacking seem more familiar.

While for some people religion may be associated with the irrational, it is also associated with what religion scholar Doug Cowan calls “the good, moral and decent fallacy.” That is, some people often assume if something is really a religion, it must represent something good. People who “stack sats” might sound weird. But people who “tithe” could sound principled and wholesome.

Using religion as a framework

For religion scholars, categorizing something as a religion can pave the way for new insights.

As religion scholar, J.Z. Smith writes, “‘Religion’ is not a native term; it is created by scholars for their intellectual purposes and therefore is theirs to define.” For Smith, categorizing certain traditions or cultural institutions as religions creates a comparative framework that will hopefully result in some new understanding. With this in mind, comparing Bitcoin to a tradition like Christianity may cause people to notice things that they didn’t before.

For example, many religions were founded by charismatic leaders. Charismatic authority does not come from any government office or tradition but solely from the relationship between a leader and their followers. Charismatic leaders are seen by their followers as superhuman or at least extraordinary. Because this relationship is precarious, leaders often remain aloof to keep followers from seeing them as ordinary human beings.

Several commentators have noted that Bitcoin inventor Satoshi Nakamoto resembles a sort of prophet. Nakamoto’s true identity – or whether Nakamoto is actually a team of people – remains a mystery. But the intrigue surrounding this figure is a source of charisma with consequences for bitcoin’s economic value. Many who invest in bitcoin do so in part because they regard Nakamoto as a genius and an economic rebel. In Budapest, artists even erected a bronze statue as a tribute to Nakamoto. 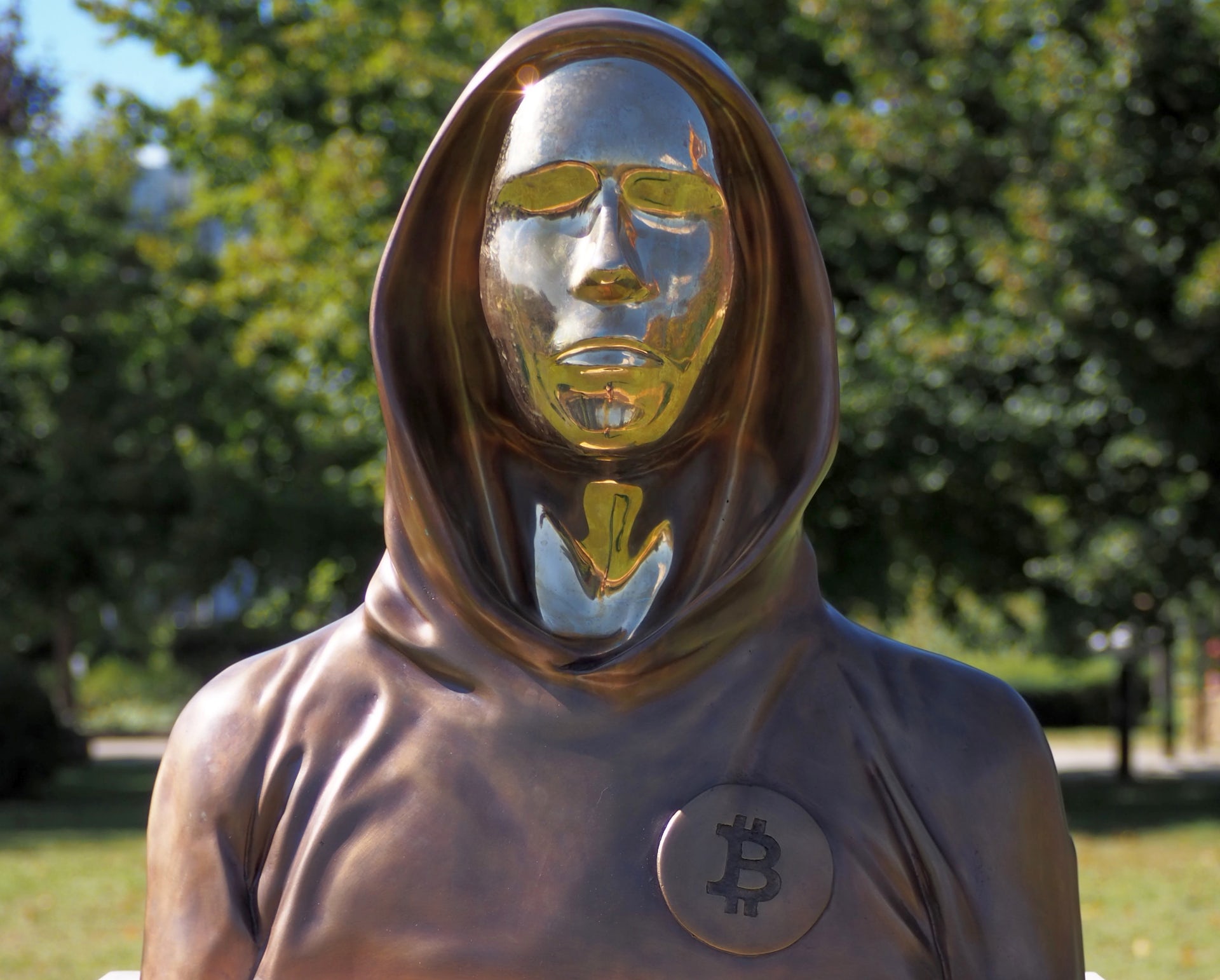 There’s also a connection between Bitcoin and millennialism, or the belief in a coming collective salvation for a select group of people.

In Christianity, millennial expectations involve the return of Jesus and the final judgment of the living and the dead. Some Bitcoiners believe in an inevitable coming “hyperbitcoinization” in which bitcoin will be the only valid currency. When this happens, the “Bitcoin believers” who invested will be justified, while the “no coiners” who shunned cryptocurrency will lose everything.

A path to salvation

Finally, some Bitcoiners view bitcoin as not just a way to make money, but as the answer to all of humanity’s problems.

This attitude may be the most significant point of comparison with religious traditions. In his book “God Is Not One,” religion professor Stephen Prothero highlights the distinctiveness of world religions using a four-point model, in which each tradition identifies a unique problem with the human condition, posits a solution, offers specific practices to achieve the solution, and puts forth exemplars to model that path.

This model can be applied to Bitcoin: The problem is fiat currency, the solution is Bitcoin, and the practices include encouraging others to invest, “stacking sats” and “hodling” – refusing to sell bitcoin to keep its value up. The exemplars include Satoshi and other figures involved in the creation of blockchain technology.

So does this comparison prove that Bitcoin is a religion?

Not necessarily, because theologians, sociologists, and legal theorists have many different definitions of religion, all of which are more or less useful depending on what the definition is being used for.

However, this comparison may help people understand why Bitcoin has become so attractive to so many people, in ways that would not be possible if Bitcoin were approached as a purely economic phenomenon.

This article by Joseph P. Laycock, Assistant Professor of Religious Studies, Texas State University, is republished from The Conversation under a Creative Commons license. Read the original article.