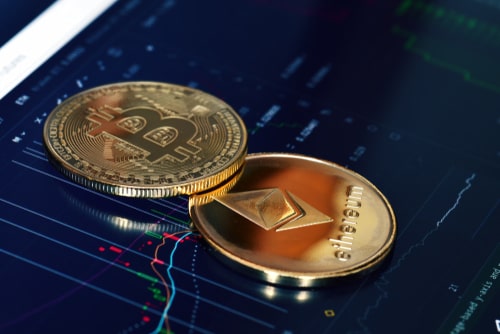 (Kitco News) The escalating Russia-Ukraine crisis, new sanctions, and surging oil prices have investors fleeing risk-on assets. And the crypto space is getting its safe-haven appeal back as more people use digital assets like bitcoin to transfer value during the conflict.

Last week, the crypto space mirrored the stock market performance as it reacted negatively to any additional geopolitical uncertainty, with Bitcoin and Ethereum seeing significant selloffs. However, this began to change as the West stepped up its sanctions against Russia over the weekend.

"Bitcoin is turning bullish here as it is showing it can rally even when risk aversion hits Wall Street," said OANDA senior market analyst Edward Moya. "As the Ukraine crisis deepens, diversification away from the Russian rouble is growing, and that has led to flows into cryptos. It looks like the Crypto Winter is over, and prices have stabilized."

The latest round of sanctions imposed on Russia, which aims to isolate its economy, has sent the country's assets into freefall this week. Russia's ruble plunged to the lowest level on record on Monday in response to new sanctions. Meanwhile, the country's central bank responded by raising its key interest rate from 9.5% to 20% and introducing capital controls.

Economic uncertainty also triggered a run on banks in Russia, as people lined up at ATMs in Moscow and at Russian banks all cross Europe to withdraw cash.

Amid these restrictions, more people are turning to Bitcoin and other cryptocurrencies to help with value transfer, said GlobalBlock analyst Marcus Sotiriou.

"We have seen crypto be correlated closely to the U.S. stock market for months, but Bitcoin is showing signs of decoupling from this correlation in the short term. Bitcoin is being heavily bid due in part to the narrative of being a permissionless and censorship-resistant way of transferring value, as it has been used during the crisis in Ukraine as well as political unrest in Canada," Sotiriou said.

Crypto has played an important role in this geopolitical conflict. Ukrainian officials have put out donation requests on Twitter, which listed online wallet addresses for Bitcoin, Ethereum and Tether. Since then, Ukraine has received more than $30 million worth of crypto donations, according to the blockchain tracking company Elliptic.

"This marks a historic moment - the first time that a government has raised money via crypto at scale," said Sotiriou on Tuesday.

The crypto data company Kaiko reported that transactions on centralized bitcoin exchanges conducted in the Russian ruble and Ukrainian hryvnia jumped to multi-month highs since Russia began its invasion of Ukraine on Thursday.

"Volume for both RUB and UAH trading pairs increased far more quickly than volume for other pairs, such as BTC-USD, which suggests the crisis is directly influencing trading behavior," Kaiko said.

Crypto drivers going forward will remain the war in Ukraine, but the Federal Reserve's monetary policy updates in the U.S. could still present a headwind for Bitcoin, Moya noted. "If financial markets grow nervous that the Fed will become more aggressive in removing accommodation, Bitcoin could settle back to the lower boundaries of its widening trading range just below the $40,000 level," he said.