The couple were accused of conspiring to launder Bitcoin that had been stolen in 2016 from Hong Kong-based Bitfinex, one of the world’s largest virtual currency exchanges. 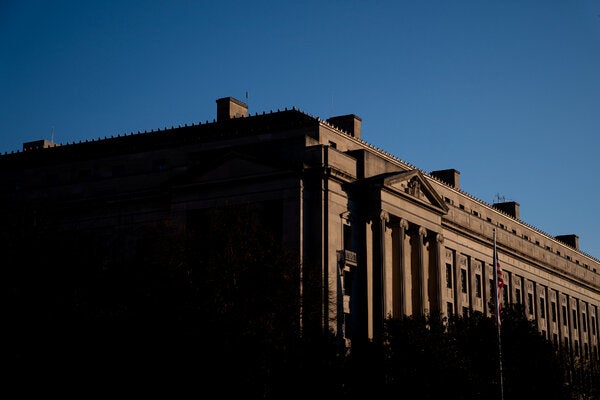 The financial seizure was the Justice Department’s largest ever based on the value of the currency at the time, officials said. Credit... Stefani Reynolds for The New York Times

WASHINGTON — The Justice Department said on Tuesday that it had seized over $3.6 billion worth of stolen Bitcoin and arrested a married couple accused of laundering the cryptocurrency that hackers had stolen six years ago.

The couple, Ilya Lichtenstein, 34, and Heather Morgan, 31, were accused in a criminal complaint of conspiring to launder 119,754 Bitcoin that had been stolen in 2016 from Hong Kong-based Bitfinex, one of the world’s largest virtual currency exchanges.

The value of the currency at the time of its seizure last week makes it the department’s largest financial seizure ever, officials said.

A Justice Department official declined to comment on whether Mr. Lichtenstein and Ms. Morgan had been involved in the hacking itself.

The breach in 2016 was among a spate of hackings into currency exchanges that have allowed for the theft of large amounts of digital currency. Even when the stolen funds were recovered, the thefts underscored the security vulnerabilities in the relatively new world of cryptocurrency. In some cases, the incidents drastically affected cryptocurrency values.

After the hacking of Bitfinex, one of the largest exchanges in the history of the cryptocurrency market, the value of Bitcoin initially plunged about 20 percent.

The arrests on Tuesday “show that cryptocurrency is not a safe haven for criminals,” Lisa O. Monaco, the deputy attorney general, said in a statement. “In a futile effort to maintain digital anonymity, the defendants laundered stolen funds through a labyrinth of cryptocurrency transactions.”

Mr. Lichtenstein and Ms. Morgan appeared in a federal court in Manhattan on Tuesday afternoon. A judge ordered them released on bond: $5 million in Mr. Lichtenstein’s case and $3 million in Ms. Morgan’s. A lawyer representing them did not immediately respond to a request for comment.

Mr. Lichtenstein, who goes by the nickname Dutch, has both American and Russian citizenship and has described himself as a tech entrepreneur, according to the complaint. Ms. Morgan describes herself on her LinkedIn page as “a serial entrepreneur” and an “irreverent comedic rapper.” The complaint, which also accuses the couple of conspiracy to defraud the United States, suggests Ms. Morgan also goes by the alias Razzlekhan. 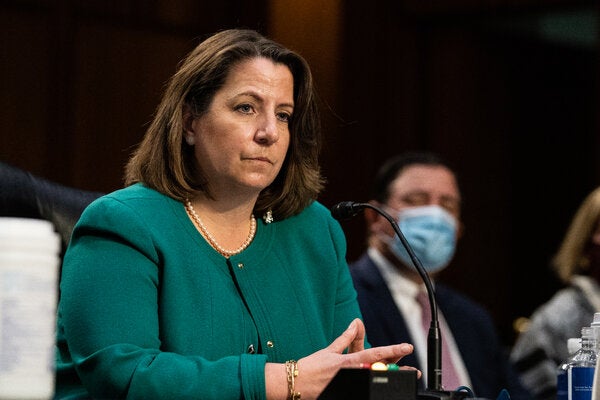 The deputy attorney general, Lisa O. Monaco, said in a statement that the arrests “show that cryptocurrency is not a safe haven for criminals.” Credit... Anna Moneymaker for The New York Times

According to court documents, the hacker who breached Bitfinex’s systems initiated 2,000 transactions to send 119,754 stolen Bitcoin to a digital wallet that was under Mr. Lichtenstein’s control.

Sign Up for On Politics   A guide to the political news cycle, cutting through the spin and delivering clarity from the chaos.

Over the last five years, about 25,000 of those Bitcoin were transferred out of Mr. Lichtenstein’s wallet using a complicated series of transactions meant to obscure that the currency had been stolen from Bitfinex, the Justice Department said.

But investigators traced the movement of the Bitcoin on the blockchain, the permanent fixed electronic ledger that records each time a Bitcoin moves to a new digital wallet. And some of those funds were eventually deposited into financial accounts controlled by Mr. Lichtenstein and Ms. Morgan, who used some of the money to buy items such as gold, nonfungible tokens and a Walmart gift card, according to the complaint.

A Guide to Cryptocurrency

A glossary. Cryptocurrencies have gone from a curiosity to a viable investment, making them almost impossible to ignore. If you are struggling with the terminology, let us help:

Bitcoin. A Bitcoin is a digital token that can be sent electronically from one user to another, anywhere in the world. Bitcoin is also the name of the payment network on which this form of digital currency is stored and moved.

Blockchain. A blockchain is a database maintained communally, that reliably stores digital information. The original blockchain was the database on which all Bitcoin transactions were stored, but non-currency-based companies and governments are also trying to use blockchain technology to store their data.

Coinbase. The first major cryptocurrency company to list its shares on a U.S. stock exchange, Coinbase is a platform that allows people and companies to buy and sell various digital currencies, including Bitcoin, for a transaction fee.

Crypto finance. The development of cryptocurrencies spawned a parallel universe of alternative financial services, known as Decentralized Finance, or DeFi, allowing crypto businesses to move into traditional banking territory, including lending and borrowing.

The arrest shows that “we will not allow cryptocurrency to be a safe haven for money laundering or a zone of lawlessness within our financial system,” Kenneth A. Polite Jr., the head of the Justice Department’s criminal division, said in a statement.

With more Americans buying and selling cryptocurrencies like Bitcoin, regulators have brought some large exchanges in the United States under official oversight.

But cryptocurrencies move through decentralized computer networks that are not under the control of any single government or company, so most trading still occurs on largely unregulated exchanges like Bitfinex, which give consumers little information about their operations.

The lack of regulation has led to a host of problems in the world of virtual currency exchanges, threatening to impair consumer confidence in cryptocurrencies and to slow widespread adoption. The first Bitcoin exchange, Mt. Gox, collapsed in 2014 after hackers breached its security systems and siphoned away $500 million in customer money.

And law enforcement officials have brought criminal charges against people who own exchanges and are suspected of facilitating criminal activity.