Update (1700ET) : GlobeNewswire issued a written statement that "journalists and other readers should disregard the news release."

Dave Pleiss, vice president, investor and public relations for GlobeNewswire said in an email to The Verge that this has never happened to the company before.

“When GlobeNewswire became aware this morning that a fraudulent user account was used to issue an illegitimate press release we promptly withdrew the press release and issued a Notice to Disregard.”

The company has already put into place “enhanced authentication steps to prevent this isolated incident from occurring in the future,” Pleiss added, and said GlobeNewswire was working with authorities on “a full investigation, including into any criminal activity associated with this matter.”

GlobeNewswire distributes 200,000 press releases per year, according to its website, but Walmart usually uses Business Wire for its press releases.

Walmart was the subject of a fake news release issued on Monday, Sept. 13, that falsely stated Walmart announced a partnership with Litecoin (LTC).

Walmart had no knowledge of the press release issued by GlobeNewswire, and it is incorrect.

Walmart has no relationship with Litecoin.

GlobeNewswire issued a notice across its service confirming that journalists and other readers should disregard the news release, "Walmart Announces Major Partnership With Litecoin (LTC)" issued September 13, 2021, over GlobeNewswire.

All further questions should be directed to GlobeNewswire.

Update (1005ET) : In an odd turn of events, many on social media are raising doubts about the legitimacy of this announcement.

The biggest red flag was that while William White is indeed Chief Market Officer of WalMart - the email address links to a site that is not WalMart's. 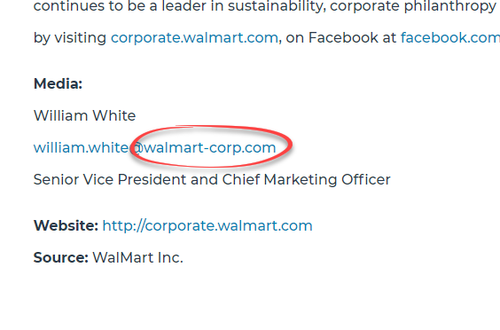 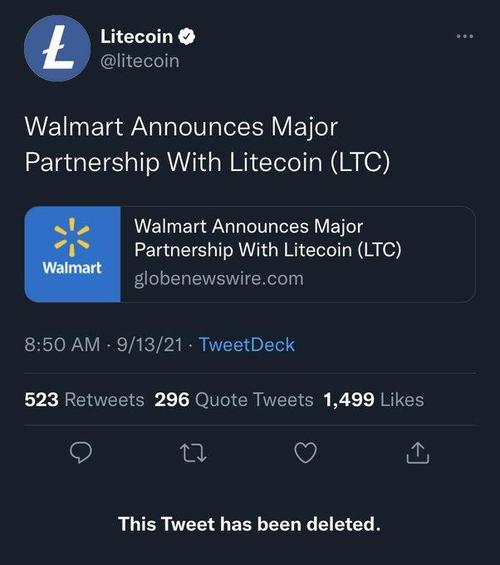 The end results is Litecoin tumbling back to earth... 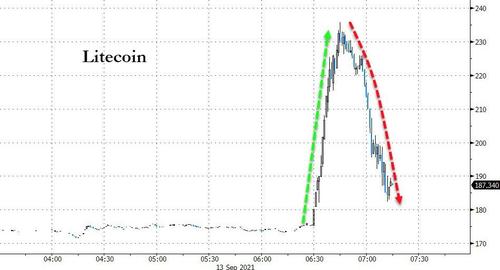 CNBC reports that a Walmart spokesperson confirmed the press release is not authentic.

T he company is trying to learn more about the news release, which the spokesperson said "isn't real."

Update (0935ET): In another indication of the mainstream adoption of cryptocurrencies, giant retailer WalMart has announced a partnership with Litecoin. The eCommerce giant intends to give its millions of shoppers across the world an opportunity to seamlessly make payments with cryptocurrencies.

"The momentum and excitement around the use of cryptocurrency are undeniable, and we are poised to make online shopping easy for our customers. As a leading eCommerce store, we are committed to bringing innovations to the online shopping experience.

By integrating Litecoin, we will enable shoppers to experience a very smooth checkout experience with near instant transaction confirmation, and near-zero fees regardless of where in the world they are.

We're very excited to be working together with the Litecoin Foundation, and further innovate our business.

Litecoin is spiking on the news.... 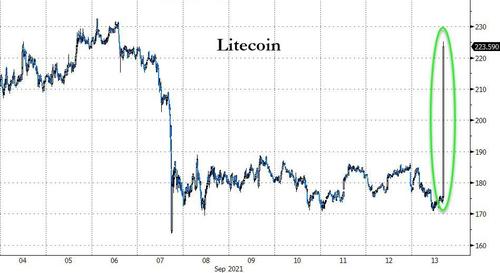 "LTC's super low fees and fast transaction times are perfect for a leading eCommerce store like Walmart. We are thrilled and extremely excited that our cryptocurrency is now supported by Walmart, opening up more opportunities for any merchants to accept Litecoin in the future."

Litecoin is similar to Bitcoin, in that it uses the same code as the latter, and shares many similarities. However, Litecoin is cheaper and faster than Bitcoin. Litecoin is also a peer-to-peer cryptocurrency that facilitates cross-border transactions and enhances digital payment systems. Like Bitcoin, Litecoin has no central authority.

Bitcoin and Ethereum are also rising on the news as WMT's announcement signals a clear shift to broader acceptance of crypto... 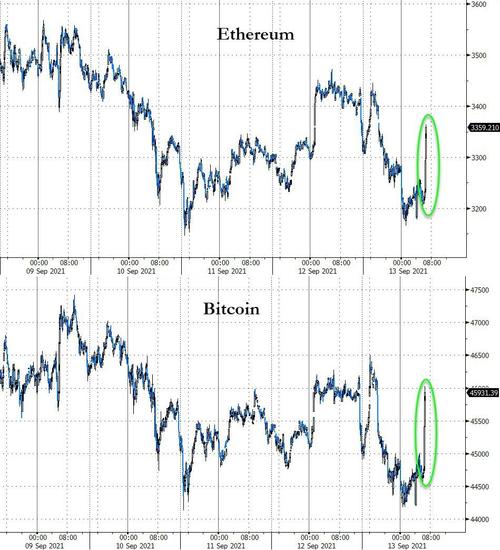 As we detailed earlier, after a chaotic and choppy weekend, Bitcoin had slid back below the somewhat magical 'Maginot Line' of $45,000 amid a flurry of headlines. 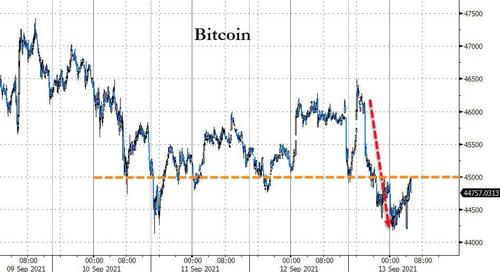 As CoinTelegraph reports, insiders reportedly expect that close to 40 of the country’s estimated 60 crypto operators will be forced to shut down.

The crux of their objection has been the obligation that all exchanges show evidence that they are operating using real-name accounts at South Korean banks.

The FSC has justified by arguing that there is a high demand from customers for more protection for their assets held at smaller crypto platforms. Yet South Korea’s banks have, for the most part, refused to engage in any risk assessment process for applicant exchanges, except for the country's top four trading platforms.

The new measures have been designed to curb Koreans’ enthusiasm for crypto trading amid concerns that retail investors, especially those from younger generations, are borrowing excessively in order to trade as they struggle with suppressed wages, a frozen job market and ever-rising real-estate prices.

Amid massive growth of the stablecoin market, CoinTelegraph reports that the United States Treasury Department has reportedly discussed potential regulation for private stablecoins.

The Treasury conducted several meetings last week to examine the risks of stablecoins for users, markets, or the financial system, as well as learn about their benefits and consider potential regulation, Reuters reported Sept 10.

“The Treasury Department is meeting with a broad range of stakeholders, including consumer advocates, members of Congress and market participants,” Treasury spokesman John Rizzo said. 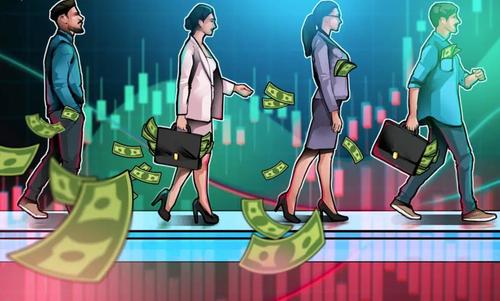 On the positive side of the ledger, giant UK-based hedge fund Brevan Howard plans to "significantly expand" its cryptocurrency and digital assets, according to a new report from Reuters.

Chief Executive Aron Landy, who has been at Brevan's helm since its co-founder and long-time crypto backer Alan Howard stepped down in 2019, has stated that the firm has a "commitment to rapidly expanding its platform and offerings in cryptocurrencies and digital assets."

We also note that Coinbase is looking to raise $1.5 billion in a debut bond offering, according to a statement Monday.

This capital raise represents an opportunity to bolster our already-strong balance sheet with low-cost capital.

Coinbase intends to use the net proceeds from the offering for general corporate purposes, which may include continued investments in product development, as well as potential investments in or acquisitions of other companies, products, or technologies that Coinbase may identify in the future.

In a Form 8-K filing with the United States Securities and Exchange Commission published on Monday, MicroStrategy stated that it has added 8,957 BTC to its corporate Bitcoin treasury in Q3 2021.

As a reminder, MicroStrategy sold the first ever junk bond to fund Bitcoin purchases in June. Its $500 million of bonds due in 2028 have risen since then to over 102 cents on the dollar, according to Trace pricing data.