Feb 24 - Welcome to the home for real-time coverage of markets brought to you by Reuters reporters. You can share your thoughts with us at markets.research@thomsonreuters.com

Cryptocurrencies have been around long enough to have a substantial track record of how they behave during a crisis.

The consensual take is that far for being a safe haven when there's mayhem across global financial markets, they tend to move in sync with other risk assets.

Well today is no exception and bitcoin is down well over 5%, just above $35,000 and getting close to lows last seen in July.

"However, it certainly hasn’t displayed any signs of being a store of value during the current crisis", he added.

By contrast, gold is doing what gold usually does when war erupts, it's up, with spot prices rising 3.4%.

"Think we are finding out which of the two is the real haven", commented Neil Wilson, an analyst at Markets.com.

Adrian Ash, director of research at BullionVault, a marketplace for precious metals, also said gold was behaving as one would typically expect.

"If war, inflation and falling stock markets sound like the perfect storm for gold, the price is certainly behaving to type", he wrote.

Frankfurt's DAX is currently losing 4.6%, a plunge which hasn't been recorded since March 18 2020. 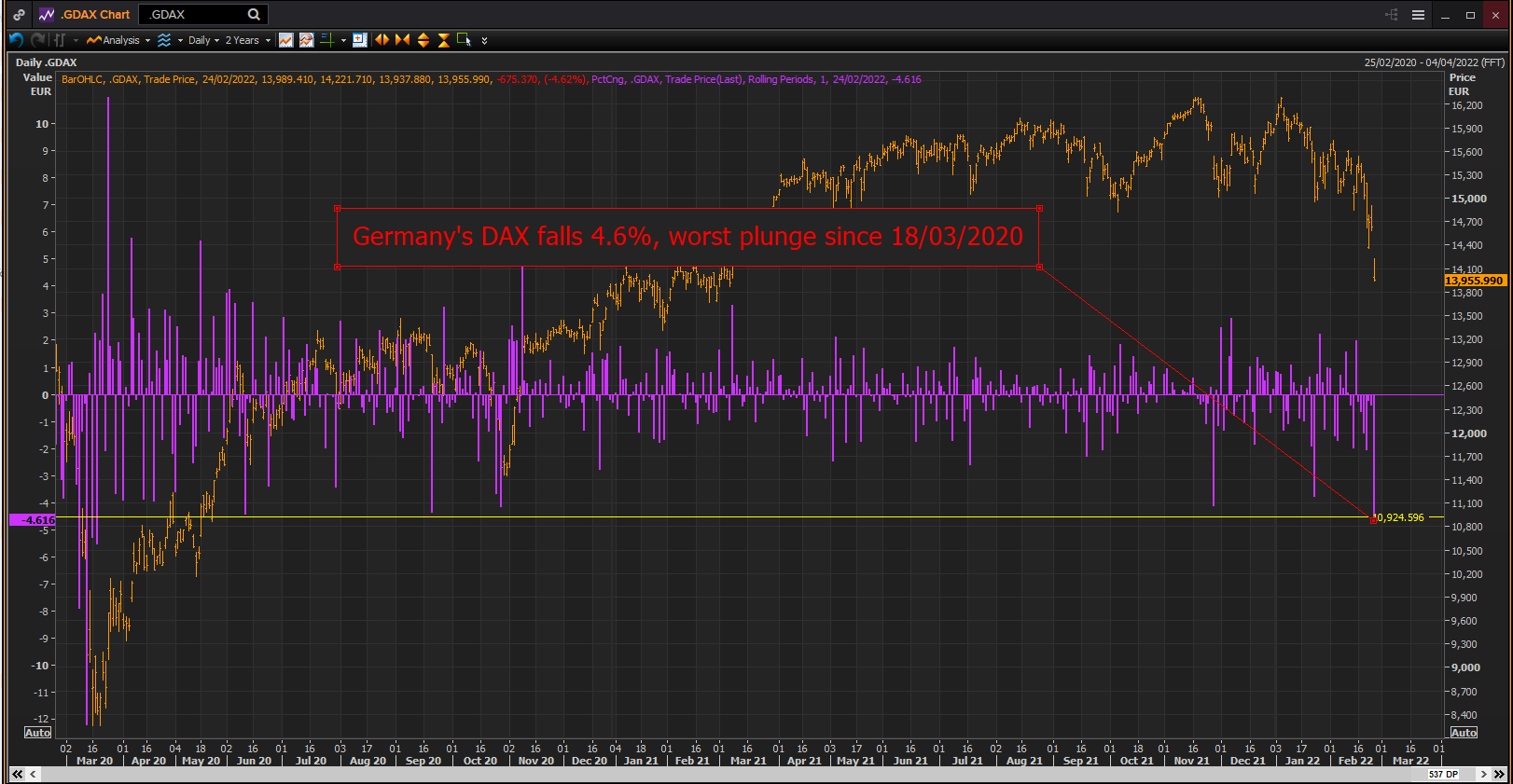 As global financial markets are thrown into a new phase of uncertainty and volatility, many asset managers are issuing notes with some advice to their clients.

The markets' reaction to the invasion of Ukraine has been brutal, with the STOXX 600 currently losing 3% but things could obviously get worse once the West announces how severe its sanctions will be.

Oil prices are already above $100 a barrel and there's room for further upside pressure.

"In the extreme risk case, which we would define as one that has a lasting and material negative impact on global growth, the conflict could escalate to a level that pushes Western nations to accept a disruption of Russia's energy flow", wrote Mark Haefele, CIO at UBS GWM.

In the meantime, what should investors do?

"Historically, the greatest risk for investors from geopolitical crises has come from overreacting and under-diversifying".

The STOXX 600 had been flirting with correction territory for a while now but Russia's invasion of Ukraine has sent the pan-European index decisively 10% below its January record high.

As one would expect the few stocks thriving in this environment are defence stocks like Dassault Aviation, BAE, Thales and Rheinmetall and defensive stocks such Belgium's pharma group UCB to name a few.

The most spectacular drops come from stocks with heavy Russia exposure like Polymetal (-35%) and banks such as Austria's Raiffeisen, losing over 13%.

Volatility obviously is through the roof at levels unseen since October 2020.

This is it. Putin has invaded Ukraine read more .

Markets are displaying all the predictable reactions, selling stocks and buying safe-havens. Treasury yields are down 10 basis points, while the Swiss franc and Japanese yen are up as is the dollar index. Gold has surged 2% and oil has jumped over $100 a barrel read more .

So what next? Economic recession? Central banks forced to stay their hand with interest rate rises? Market bets on a 50 basis-point Federal Reserve rate rise for March are fading and at least one ECB policymaker has already urging the bank to maintain its stimulus programme until year-end at least.

The obvious question that arises from the oil price effect is how much this aggravates inflation. And whether in that situation bonds will really prove the best safe-havens. Watch those central banks.

It will also test the view that geopolitics are a buying opportunity. Will that hold true even as a situation described as the worst since the Cuban missile crisis unfolds?

In the meantime, anyone who dismissed Western sanctions as toothless should glance at Russian asset prices. A country with a $640 billion warchest and debt ratios around 20% now carries a 5 percentage point yield premium on its dollar bonds relative to U.S. Treasuries.

That's more than what's demanded of countries such as Iraq and Bolivia.

But it's less about the sanctions that have been announced and more about the ones that may now rain down, including cutting Moscow off from international payment systems and banning holding any of its bonds. A firesale of Russian assets has accelerated and the rouble has slumped more than 7% against the dollar.

All this of course will inflict pain on those doing the sanctioning too, above all, Europe where the euro has slipped to one-month lows. And don't forget the country under attack, Ukraine, whose dollar bonds now price a default on debt. 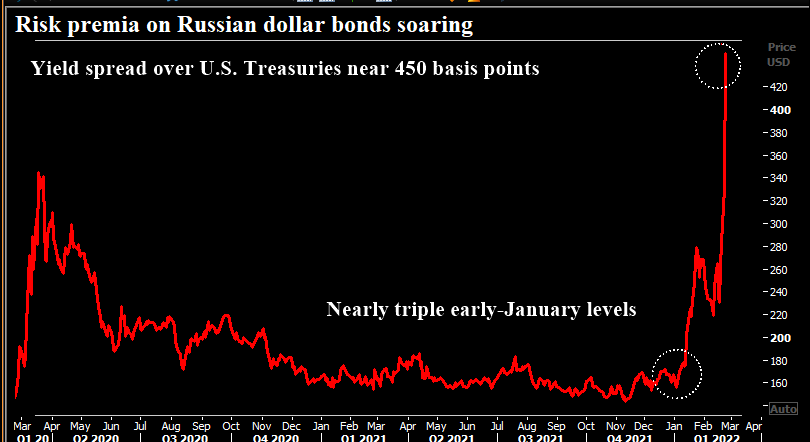 Key developments that should provide more direction to markets on Thursday:

European stock futures are down heavily this morning one hour before the cash market open after Russian forces fired missiles at several cities in Ukraine and landed troops on its coast, causing a big risk-off wave across global markets.

Fears that a war will boost inflation and derail the economic recovery rattled investors, sending contracts on the German DAX index falling more than 5% while EuroSTOXX futures fell as much as 5%and FTSE futures were down 2.8%.

Even though Europe is seen as particularly vulnerable because of its high reliance on Russian energy imports, the angst spread across other regional market with Asian shares also down sharply and U.S. index futures pointing to losses of around 2% later on Wall Street.