Cryptocurrency and blockchain news presents many headlines that are hard to believe, so when a seemingly authentic press release ties a major retail outlet to second-tier crypto, it can take a moment to find out the truth. That was the case with a fake “Walmart takes Litecoin” release in September, and again this morning as PR Newswire published an illegitimate announcement claiming Kroger will start accepting Bitcoin Cash.

Because Kroger’s webpage pulls in the releases from PR Newswire, the fake release actually appeared on Kroger.com until it was removed. Kroger has been linked to cryptocurrency but does not accept it as payment. A partnership announced with Lolli late last year allowed users of that rewards program to earn small amounts of Bitcoin back on purchases.

Kroger PR confirmed to The Verge that the Bitcoin Cash release is fake and quickly issued a statement.

This morning a press release was fraudulently issued claiming to be The Kroger Co. that falsely stated the organization will begin to accept Bitcoin Cash. This communication was fraudulent and is unfounded and should be disregarded. 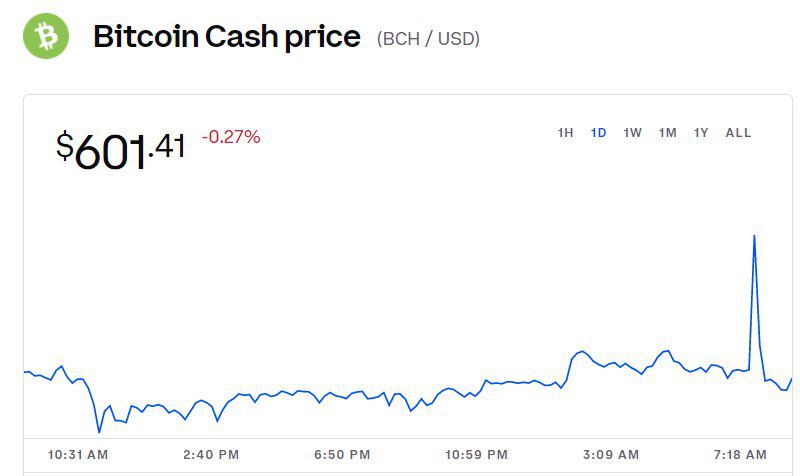 The price of Bitcoin Cash spiked briefly due to the hoax. Image: Coinbase

In less than 15 minutes, Coinbase shows the price of Bitcoin Cash rose nearly 5 percent, going from about $602 to $630, which was likely the point of the hoax. It returned to the previous level almost immediately, but whoever was behind the scheme may have netted a profit already.

Bitcoin Cash arose from a contentious chain split in 2017, as its proponents made a “hard fork” from Bitcoin, claiming that cryptocurrency hasn’t addressed high transfer fees and block size limitations. Coinbase halted trading for a time under accusations of insider trading, while in the years since the value of Bitcoin Cash has not kept up with the massive spikes seen from Bitcoin.