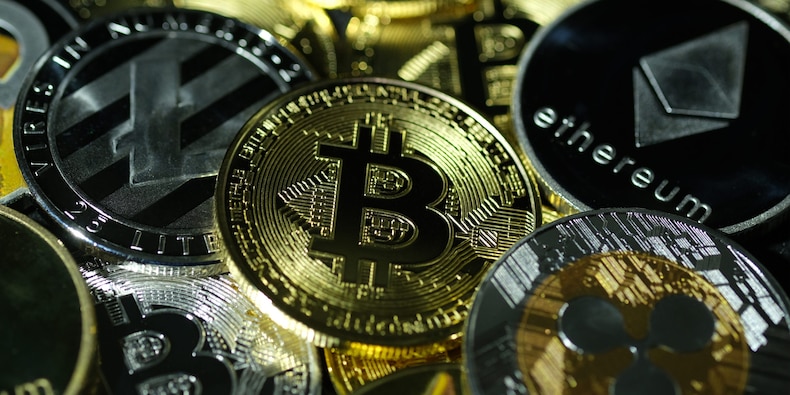 Cryptocurrencies have been on a wild ride in 2021.

The market capitalization of the cryptocurrency universe has broken the $2 trillion barrier for the first time since May after a strong rebound in bitcoin and other tokens.

The total value of all cryptocurrencies reached $2.02 trillion on Saturday, according to Coinmarketcap. It hovered around that level until dipping slightly to $1.96 trillion on Sunday. Bitcoin's market cap stood at $863 billion, while ether's was $370 billion.

It's been a wild year for cryptocurrencies. They boomed in the first few months of 2021 as governments pumped stimulus into economies, but tumbled in May and June when Tesla boss Elon Musk criticized bitcoin's energy use and China cracked down on the tokens.

However, the market has gained a new lease of life in the last few weeks, with bitcoin rising from below $30,000 in July to trade at around $46,000 on Sunday.

Analysts have struggled to put a finger on exactly why the asset class has rebounded. Some have suggested that Elon Musk's comments have once again been a catalyst. He told a bitcoin conference in July that Tesla is likely to accept bitcoin as payment again once it is more eco-friendly.

Read more: The chief market analyst at charting-software firm TrendSpider shares the technical indicators that tell him bitcoin and ether are set to rise to all-time highs in the next 5 months

Institutions also appear to have remained interested, despite the price drops of the spring. Insider revealed in July that JPMorgan has given its financial advisors the green light to give all its wealth-management clients access to cryptocurrency funds.

So-called altcoins such as ether and cardano's native token ada have also rallied sharply in recent weeks. A major network upgrade has helped ether - the second-biggest cryptocurrency - climb from below $1,800 in July to $3,156 on Sunday.

Ada has surged in recent days, also due partly to excitement around upcoming network changes. The token traded at under $1.10 in July but stood at $2.10 on Sunday.

Cryptocurrencies have rebounded despite growing regulatory threats. Watchdogs around the world are increasingly concerned about crypto derivative exchanges such as Binance, and the US Securities and Exchange Commission has signaled that it wants increased oversight of the crypto landscape.