We Put a Blockchain on Google Sheets 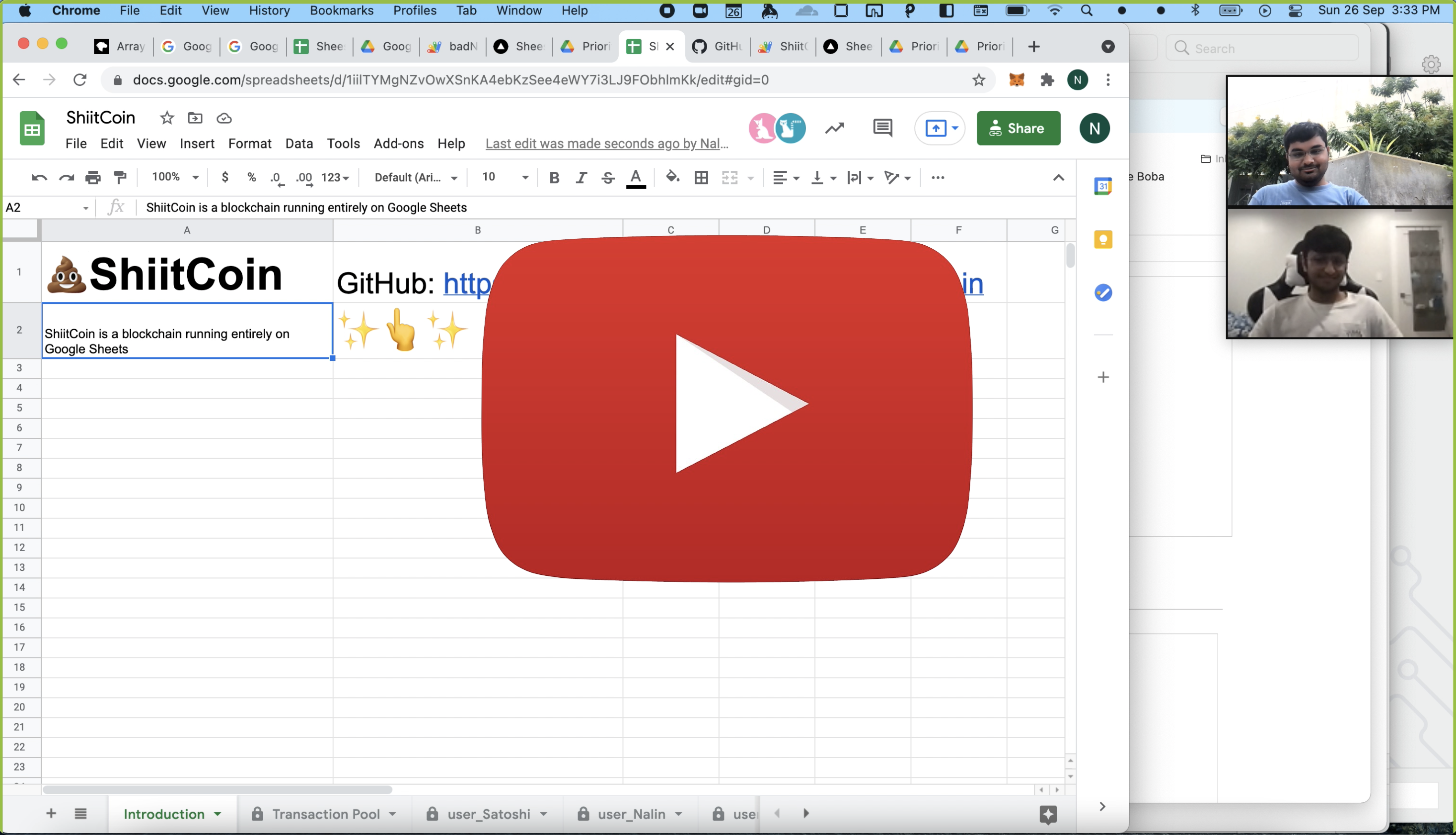 Some ideas are bad, and then sometimes there are ideas so bad they actually go back around to being genius — we think we've come across one of those. Yes! We have an end to end blockchain working entirely off of a google sheet: transaction broadcasting, mining, wallets, gossip — all of it!

but we’re hoping to farm some internet points there’s some educational value to exploring the barebones of a blockchain which we’ll share here. But first, let's talk about our adventure starting from bets on slack chat to this masterpiece of DeFi.

Why are we subjecting you to this madness?

The origins of this project were humble, we started in our fictional garage (as coworkers at a startup) and faced a very practical problem: we made KitKat bets with each other about the most random things, and we wanted a “secure” way to maintain this ledger.

We used to just put the ledger in our slack chat and committed the current chain state SHA to each other, but this mechanism kinda sucked: messages on slack are editable, you have no version history and there’s no clean way to look at the "chain" and understand why I owe Adhyyan 3 KitKats today when I used to owe him only 1 yesterday.

Too poor to afford ETH gas or BTC fees to put our barter on-chain, we came up with the genius idea to making our own “blockchain” — completely on Google Sheets. 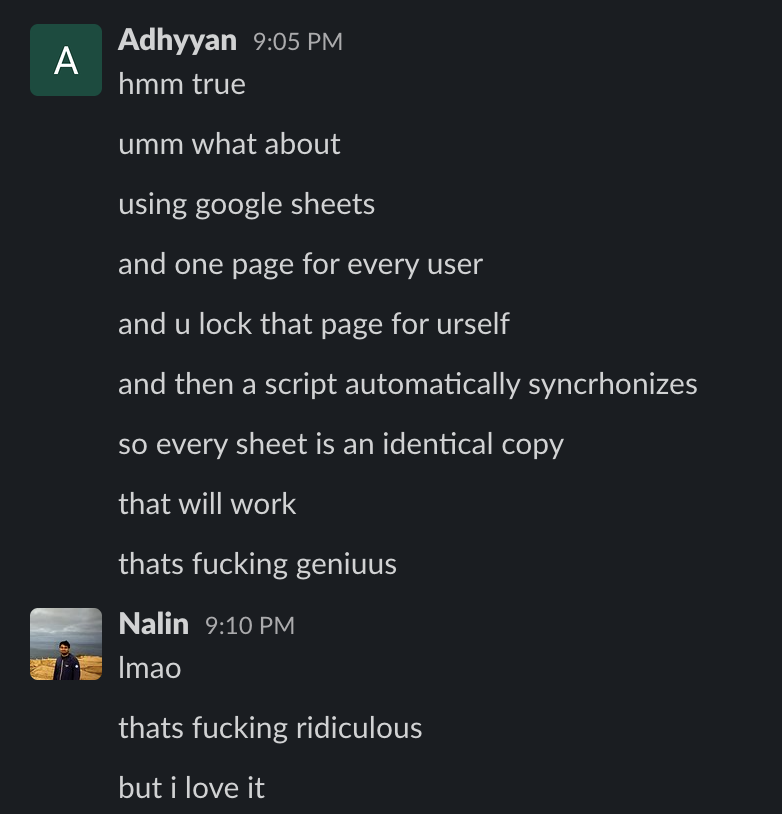 Why is this even possible?

Our system works by creating one page for every client, and everyone runs their own miner and gossip client in a script. When someone wants to make a transaction, they use their private key to sign the transaction and just put it into the public Transaction Pool sheet. Mining script reads this sheet to figure out how it wants to include these transaction in their blocks.

People often rave about what a great programming environment Excel and spreadsheets are, but honestly, Google Sheets are next level: daddy Google makes so much possible I wouldn't be surprised if someone figures out how to run an entire company off of Google orksuite Apps. For ShiitCoin in particular, these features were clutch:

OK, I’m sold, give me the nitty-gritty

There's a lot going on in a "traditional" blockchain - wallets, mining, node syncing, transaction broadcasting etc. We came up with a spec to strip down to minimal complexity based on what's possible in our context of Google Sheet. The main things we had to figure out were:

So let's break down each one:

With this library set up, we were able to support all the primitive crypto operations needed for our use case: signing messages, verifying signatures, generating private/public keys pairs, etc.

In ShiitCoin, gossip (in the traditional sense of the word) is much simpler than regular chain clients: All peers can simply be discovered via the Google Sheet (sad centralisation noises) so you don't need Kademlia or other complicated discovery mechanisms, and the transaction pool is shared with everyone already.

So, the only complicated question to figure out is consensus. We implement something very similar to the idea of Nakamoto consensus, using a longest chain rule to settle any disagreements. Every node looks at the chains of ~7 other random nodes, and picks the longest chain, settling ties using a heuristic of similarity to the chain the node currently believes in. Notice that due to the Google Sheets centralisation, this is a much more pull process than the usual back and forth of gossip between nodes, as every node publishes its current beliefs in real time.

For block generation, we went with a simple proof of work scheme, based on the same ideas as bitcoin - run SHA with random nonce until you create a block meeting certain difficulty threshold. To implement this in Google Apps Script, we depend on clients using the "Time Trigger" feature, which allows them to run a script every N minutes, running an attempt to mine a new block.

We set up the chain such that we only allow 3 transactions in each block, which simplifies transaction selection for mining software (besides simplifying the user interface of the sheet). Miners can simply go with picking the three transactions with highest offered fee to maximize their rewards. Note that this diverges significantly from BTC and ETH, which have a notion of weights for each transaction, turning block creation into a knapsack problem for miners.

Also worth noting that the way we set up difficulty and coinbase rewards is quite imperfect. We have a fixed constant difficulty (hardcoded) as opposed to an adjusting difficulty mechanism (like most other coins) so as total mining hash rate increases, blocks will be generated faster and faster. Similarly, coinbase reward is fixed at constant 500 ShiitCoin per block mined, and doesn't adjust over time.

A transaction in ShiitCoin is much simpler than a typical BTC/ETH transaction. It's simply a record of address a paying address b, without the capabilities to store arbitrary data or implement more complicated schemes. Further, we chose to use a model similar to Ethereum's Accounts for wallets as opposed to Bitcoin's UTXO. For our proof of concept, understanding and tracing the Account model is much cleaner, in exchange for the slight added complexity from account sequence numbers.

As for handling public/private key pairs, we concluded that it would be unwise to try to put the private key related computation on the google sheet. Given our shared data model, it's very hard to not inadvertently leak it at any step. So we instead decided to implement a simple in-browser frontend to handle transaction signing and private key management: https://shiit-coin.vercel.app . While this made dealing with account sequence/nonce numbers a bit more cumbersome, it simplifies other aspects of wallet management: On first load, it allows you to generate or paste in a new private key, so armed with the sequence, you can use it to sign any transactions. We've also used the magic of local storage to make this private key persist in your browser storage, so you can refresh or come back later to your private key, always read to sign transactions. This pattern is inspired by how DarkForest handles transactions in-game, which itself takes inspiration from Austin Griffith's work.

As for the sequence, we've put it in the user spreadsheet (in the top row) and it is auto-updated by the Google Apps Script on every tick, so users can just copy-paste it from the sheet into the website.

And with those pieces in place, you too can make your very own blockchain in a Google Sheet. If you're interested in setting up your own sheet/client, check out our client setup guide.

There were a lot of other emergent ideas we came up with along the way we were curious to explore, so if you're interested in any of these, hit us up!

Surely, there's at least one good idea in these hypotheticals, hit us up if you have thoughts!