Why New York State Is Experiencing a Bitcoin Boom 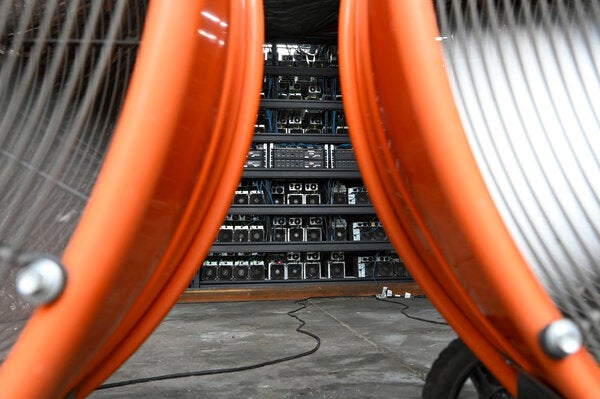 A bitcoin mining operation is opening northeast of Niagara Falls this month on the site of the last working coal plant in New York State.

Across the state, a former aluminum plant in Massena, already one of the biggest cryptocurrency sites in the United States, is expanding.

And in Owego, a metal-recycling mogul with 11.3 million Instagram followers is making a gritty start-up with banks of computers in shipping containers next to a scrapyard.

Soaring Bitcoin values may be the investment talk of Wall Street, but a few hours north, in upstate New York, the buzz is about companies that are scrambling to create the digital currency by “mining” it virtually with all types and sizes of computer farms constantly whizzing through transactions.

In just a few years, a swath of northern and western New York has become one of the biggest Bitcoin producers in the country. The prospectors in this digital gold rush need lots of cheap electricity to run thousands of energy-guzzling computer rigs. 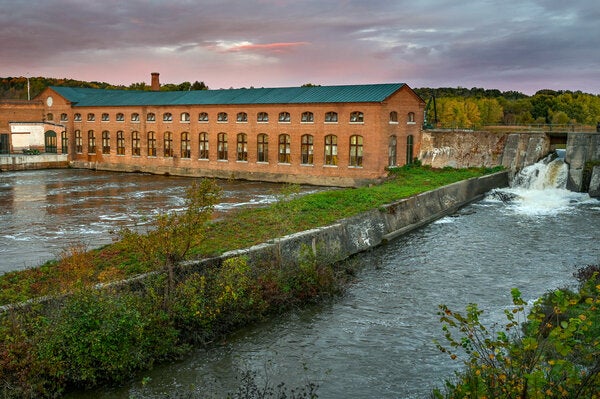 In a mix of old and new technologies, operators of the 1897 Mechanicville Hydroelectric Plant, on the Hudson River north of Albany, have begun a modest Bitcoin mining business powered by huge Victorian-era turbines. Credit... Cindy Schultz for The New York Times

The area — with its cheap hydroelectric power and abundance of shuttered power plants and old factories — was ripe for Bitcoin mining. The abandoned infrastructure, often with existing connections to the power grid, can readily be converted for Bitcoin mining.

The companies say they are boosting local economies by bringing industry back and creating a crypto vanguard north of New York City, where Bitcoin stock, though unpredictable, hit record highs on Wall Street this year and which the incoming mayor, Eric Adams, envisions as a cryptocurrency hub.

But the surge of activity has also prompted a growing outcry over the amount of electricity and pollution involved in mining for Bitcoin. Globally, cryptocurrency mining is said to consume more electricity annually than all of Argentina. China, once home to perhaps two-thirds of all crypto mining, banned the practice this year to help achieve its carbon-reduction goals, driving some miners to New York.

As a result, environmental groups say, the Wild West-style scramble, coupled with a lack of restrictions on Bitcoin mining, is threatening the state’s own emission-reduction goals, which call for more renewable power and rapid reductions in fossil-fuel emissions.

Bitcoin mining companies often require only basic building or planning permits from local governments, many of them faded industrial towns eager for any new business-tax revenue they can generate. 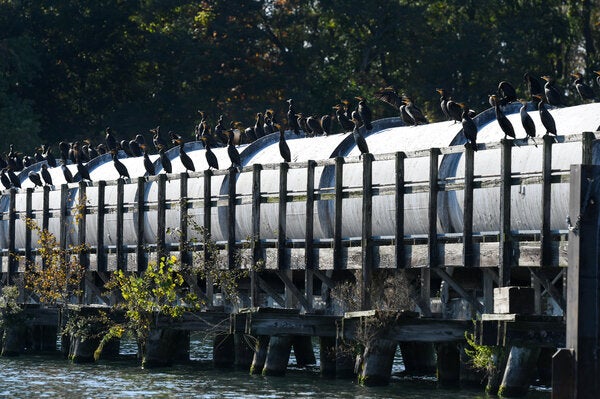 In the Finger Lakes region, a former coal plant on pristine Seneca Lake has been converted into the Greenidge Generation natural gas-burning plant, which now powers Bitcoin mining on site. Near Buffalo, a Bitcoin company is seeking cheaper electricity by taking over a part-time gas-fired power plant and revving it up for round-the-clock use.

The resulting uptick in greenhouse gas emissions will hasten the impact of climate change, say environmental groups like Earthjustice and the Sierra Club, which are monitoring upstate New York’s many old natural-gas plants that could be readily repurposed as Bitcoin mining operations.

Plants that buy renewable energy from the grid have also drawn complaints. Since a large Bitcoin mining plant can use more electricity than most cities in the state, environmentalists warn that crypto mining will leave other areas dependent on fossil fuel power.

The abundance of hydroelectric power and other kinds of renewable energy upstate helps large mining companies that buy it in bulk promote themselves as environmentally conscious.

The plant opening northeast of Niagara Falls this month, in Somerset, N.Y., is part of a $550 million project by Terawulf, a Bitcoin mining company. The project also includes a proposed 150-megawatt data center at a former coal plant on Lake Cayuga in the Finger Lakes.

Paul Prager, Terawulf’s chief executive, said the Somerset plant would make use of hydroelectric power salvaged from the falls that is otherwise difficult to send to other locations because of grid congestion.

And because the plant would comply with state environmental rules and not cause air pollution, he said, “we look at regulations as a really good thing.”

But despite requiring companies that engage in many aspects of Bitcoin activity, including trading the currency, to obtain a license, New York places no restrictions on mining.

Some municipalities, including Plattsburgh and Massena, two early Bitcoin-mining destinations near the Canadian border, have resorted to moratoriums on the practice.

Sign up for the New York Today Newsletter   Each morning, get the latest on New York businesses, arts, sports, dining, style and more.

The bans have since been lifted, but some lawmakers want to make New York one of the first states to prohibit certain types of Bitcoin mining. In June, the State Senate approved a bill that would have imposed a statewide moratorium on some fossil-fuel-powered mining; the legislation died in the Assembly.

“It has been easy for these companies to fly under the radar because the whole industry is confusing to understand, at first,” said Assemblywoman Anna R. Kelles, a Democrat who represents the Ithaca area and sponsored the bill. “It’s too new of an industry not to be regulated federally or statewide in respect to greenhouse gas emission and the effect on water and air.” (Ms. Kelles said she planned to revive the bill next year.)

For the same reason, some environmental activists have urged Gov. Kathy Hochul to issue an executive order to ban some crypto mining. 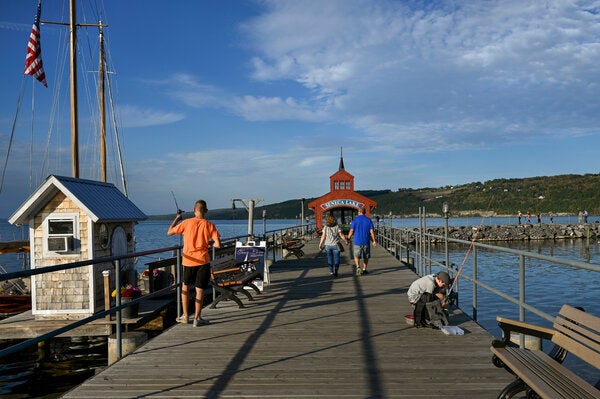 The health of Seneca Lake, a popular vacation destination in New York’s Finger Lakes region, is part of a battle over the Greenidge plant. Credit... Cindy Schultz for The New York Times

In 2017, the shuttered coal plant on Seneca Lake was converted into a natural gas-burning plant by Greenidge, which was owned at the time by Atlas Holdings, a private equity firm with $6 billion in holdings. Greenidge now promotes itself as the first publicly traded company with a bitcoin mine integrated as a part of a power plant. The plant has a 106-megawatt capacity, allowing it to generate enough electricity to power around 85,000 homes.

Greenidge’s chief executive, Dale Irwin, said in a statement that the plant was “creating a new economic engine bringing a piece of the world’s digital future to upstate New York.”

But the plant’s greenhouse gas emissions have increased along with its mining activity, and so has opposition from some local residents who call the plant an environmental threat to this rural stretch of vineyards, farm stands, pristine waterways and world-class gorges.

A local blogger has reported on Greenidge’s permit to draw more than 100 million gallons of water a day from Seneca Lake for cooling purposes and to then return it at warmer levels to a nearby trout stream tributary.

A Guide to Cryptocurrency

A glossary. Cryptocurrencies have gone from a curiosity to a viable investment, making them almost impossible to ignore. If you are struggling with the terminology, let us help:

Bitcoin. A Bitcoin is a digital token that can be sent electronically from one user to another, anywhere in the world. Bitcoin is also the name of the payment network on which this form of digital currency is stored and moved.

Blockchain. A blockchain is a database maintained communally, that reliably stores digital information. The original blockchain was the database on which all Bitcoin transactions were stored, but non-currency-based companies and governments are also trying to use blockchain technology to store their data.

Coinbase. The first major cryptocurrency company to list its shares on a U.S. stock exchange, Coinbase is a platform that allows people and companies to buy and sell various digital currencies, including Bitcoin, for a transaction fee.

Crypto finance. The development of cryptocurrencies spawned a parallel universe of alternative financial services, known as Decentralized Finance, or DeFi, allowing crypto businesses to move into traditional banking territory, including lending and borrowing.

Mr. Irwin said the outflow posed no danger and that lake temperatures, measured daily by independent sources, had not been affected.

And although the plant’s emissions have increased since 2019, he said, they were still well below state-permitted levels. The plant poses no environmental threat, he insisted. 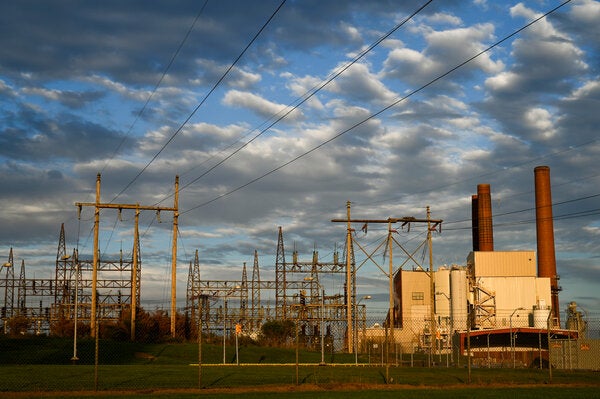 Greenidge Generation is applying to state regulators for air permit renewals, and opponents see an opportunity to curb the company’s expansion. Credit... Cindy Schultz for The New York Times

Greenidge is applying to the state to renew air emissions permits, and opponents see an opportunity for the state to curb the company’s expansion.

With political and public pressure mounting, Basil Seggos, the state’s environmental conservation commissioner, wrote on Twitter in September that “Greenidge has not shown compliance with NY’s climate law.” He urged residents to participate in the public comment period regarding the permit renewal.

To build several structures at the plant, Greenidge obtained local planning board approval in April from the town of Torrey.

Patrick H. Flynn, 79, a farmer and the Torrey town supervisor, called Greenidge a boon to the area and said that renewable energy was “overrated.”

“We can’t restrict a business,” he said. “Whether they’re making Bitcoin, it’s no different than raising cattle or pigs or chickens.” 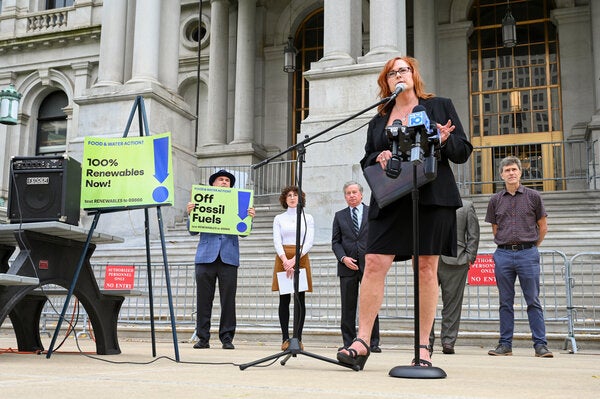 “It can’t be a town-by-town fight,” said Yvonne Taylor, left, the vice president of Seneca Lake Guardian, a local conservation group. “We need the governor to step in.” Credit... Cindy Schultz for The New York Times

Yvonne Taylor, the vice president of Seneca Lake Guardian, a local conservation group, accused state officials of failing the public by not requiring an environmental review before issuing permits to Greenidge, and by essentially leaving approvals to local governments.

“It can’t be a town-by-town fight,” said Ms. Taylor, a speech pathologist whose family has lived on Seneca Lake for generations. “We need the governor to step in. If she wants to be a champion on climate, she needs to adopt a moratorium on this type of energy-intensive cryptocurrency, or we’ll never achieve our climate goals.”

Greenidge’s case is not unique. Digihost, the Bitcoin company in Buffalo that is reviving a gas-fired power plant, has faced criticism that the increased gas emissions will affect areas long plagued by industrial toxins. Among them is Love Canal, the Niagara Falls neighborhood that became infamous for the toxic landfill that harmed hundreds of residents. 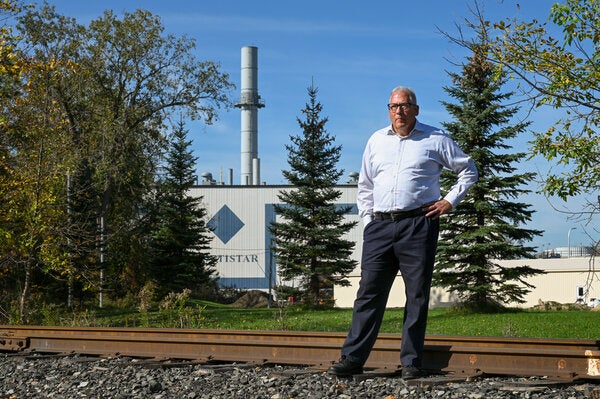 “A lot of industry has left over the years, and here we are trying to bring Digihost in and people are fighting us on that,” said Robert Pecoraro, president of the common council in North Tonawanda, N.Y. Credit... Cindy Schultz for The New York Times

But local officials approved Digihost’s plans largely because the environmental toll of the new operation seemed minimal compared with the benefits the company was expected to bring, including new jobs and up to $1 million in annual fees for municipal water to cool the plant, said Robert Pecoraro, the president of the common council in North Tonawanda, where the plant is.

Digihost officials say the plant will operate within state emissions limits, begin shifting to more renewable energy sources over time, feed the grid when needed and help western New York keep up with the tech industry while creating at least 30 permanent jobs.

Mr. Pecoraro stood outside the gas plant recently and watched workers build a large shed to house the new servers. He said he did not understand the opposition to Digihost and the economic boost it would bring to the area.

“A lot of industry has left over the years,” he said. “And here we are trying to bring Digihost in and people are fighting us on that.”