Critics argue the bitcoin and ethereum networks consume too much energy. 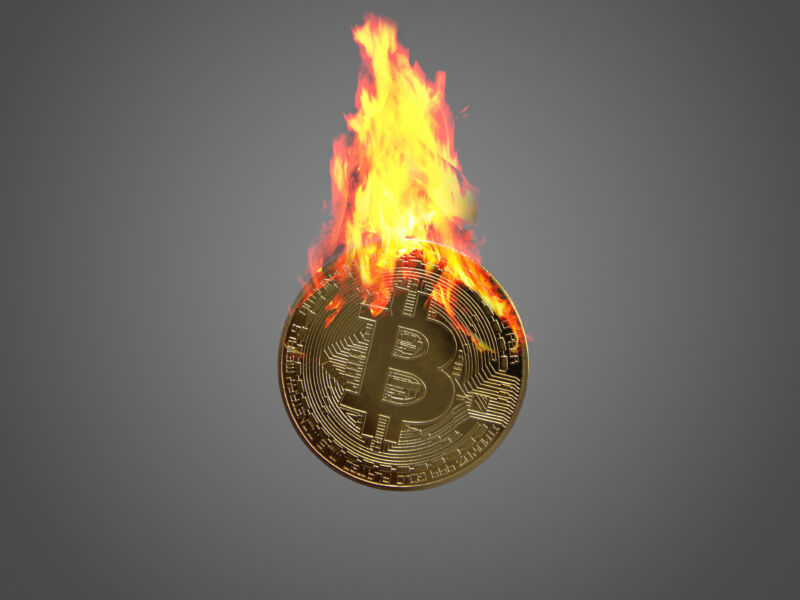 More than 200 long-time Wikipedia editors have requested that the Wikimedia Foundation stop accepting cryptocurrency donations. The foundation received Crypto donations worth about $130,000 in the most recent fiscal year—less than 0.1 percent of the foundation's revenue, which topped $150 million last year.

Debate on the proposal has raged over the last three months.

"Cryptocurrencies are extremely risky investments that have only been gaining popularity among retail investors," wrote Wikipedia user GorillaWarfare, the original author of the proposal, back in January. "I do not think we should be endorsing their use in this way."

GorillaWarfare is Molly White, a Wikipedian who has become something of an anti-cryptocurrency activist. She also runs the Twitter account "web3 is going just great," which highlights "some of the many disasters happening in crypto, defi, NFTs, and other web3 projects," the account profile says.

In her proposal for the Wikimedia Foundation, GorillaWarfare added that "Bitcoin and Ethereum are the two most highly used cryptocurrencies, and are both proof-of-work, using an enormous amount of energy."

According to one widely cited estimate, the bitcoin network consumes around 200 TWh of energy per year. That's about as much energy as is consumed by 70 million people in Thailand. And it works out to around 2,000 kWh per bitcoin transaction.

Bitcoin defenders countered that bitcoin's energy usage is driven by its mining process, which consumes about the same amount of energy regardless of the number of transactions. So accepting any given bitcoin donation won't necessarily lead to more carbon emissions.

But cryptocurrency critics argued that Wikimedia's de facto endorsement of cryptocurrencies may help to push up their price. And the more expensive bitcoin is, the more energy miners will devote to creating new ones.

Crypto skeptics pointed out that people can easily convert their bitcoins to dollars before donating. But US tax law gives advantages to those who donate an asset directly to a charity.

"Bank transfers, credit cards, and Paypal are inaccessible for millions of people who don't have government ID and therefore can't open an account," wrote Wikipedia user AnarkioC. "They don't allow anonymous or pseudonymous donations (could be risky depending on your personal situation); and they can easily be surveilled and censored."

Votes like this aren't binding in the Wikimedia Foundation. Legally speaking, the foundation is independent of the Wikipedia community and doesn't necessarily have to act on its requests.

In a January comment, foundation spokesman Greg Varnum said that "our teams will continue to follow this discussion and listen to the feedback; we are already considering what has come up here as we determine our path forward."

We've asked the Wikimedia Foundation for comment on the vote and will update this story if we get a response.

If the foundation complies with the community's request, it wouldn't be the first organization to stop using cryptocurrencies due to environmental concerns. Earlier this month, the Mozilla Foundation announced it would stop accepting cryptocurrencies that use the energy-intensive proof-of-work consensus process. These include bitcoin and ether—though the latter is expected to convert to a proof-of-stake model in the future.

Gaming company Steam stopped accepting bitcoin in 2017, citing the network's transaction fees, which were then near record highs.

Update: The Wikimedia Foundation responded to Ars by email: "We are aware of the community's request that the Foundation consider ending our acceptance of donations in cryptocurrency. Our Fundraising team is reviewing the request and related discussions and we will provide additional information once they complete that process."

Tim Lee was on staff at Ars from 2017 to 2021. In 2021, he launched Full Stack Economics, an independent email newsletter about the economy, technology, and public policy. You can subscribe to his newsletter here.